A collaboration between Miami-based architecture firm Arquitectonica and Italian superstar-designer Piero Lissoni, this boutique condominium development is a melding of American and European influences, a slice of the Cote d’Azur on a serene stretch of Miami Beach, complete with a private marina. Arquitectonica is known for its use of color and texture, but here, the design is more understated. Floor-to-ceiling windows and expansive wavelike terraces accentuate the views of Biscayne Bay and the Atlantic Ocean. Interiors are similarly streamlined, with a pared-back palette, lofty ceilings, and open-plan layouts that celebrate light and space. 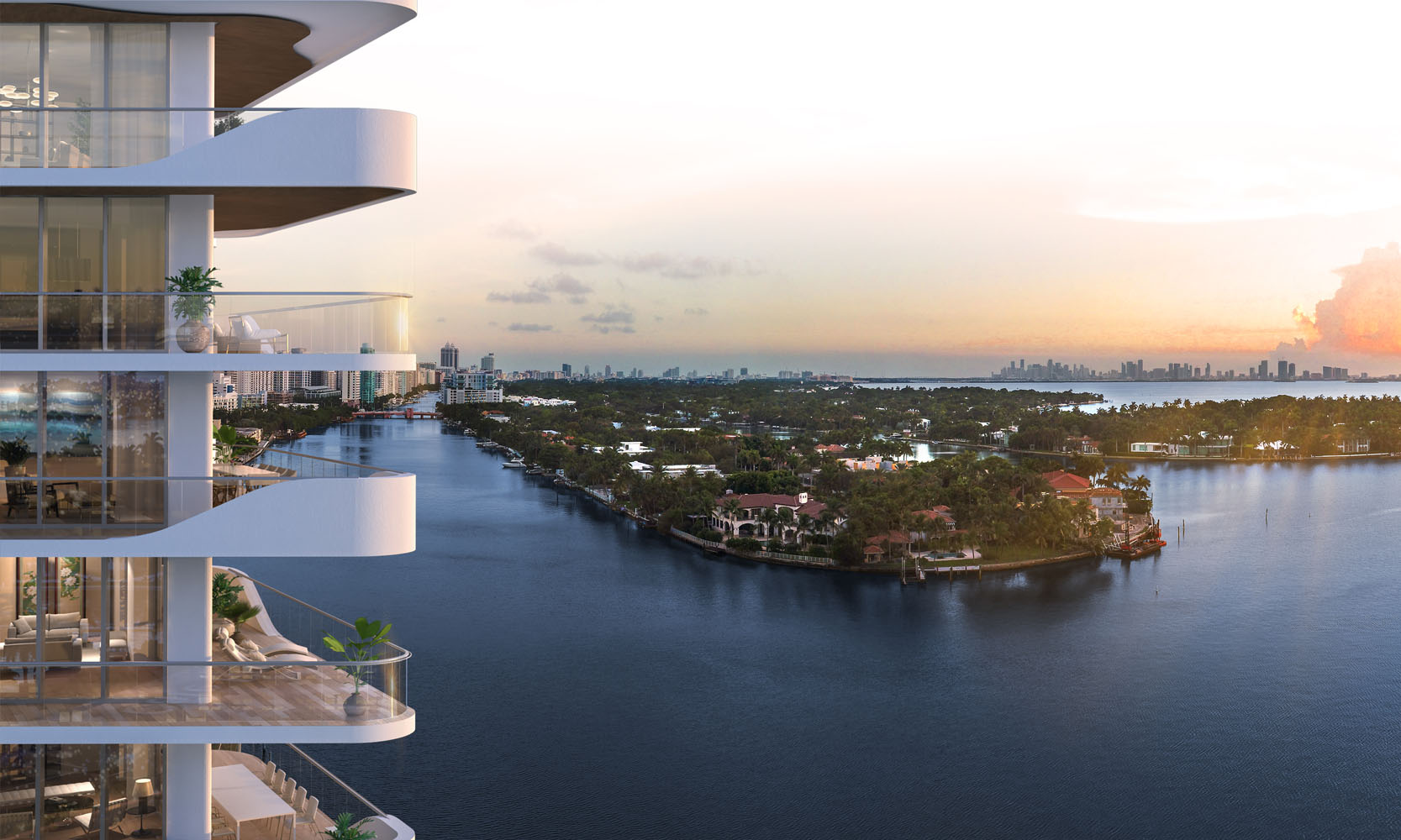 Founded in 1977 as an experimental design studio by Bernardo Fort-Brescia and Laurinda Spear, Arquitectonica is responsible for bringing modern architecture to Miami. The firm’s pop-art-influenced style and innovative use of glass, steel, color, and texture put Miami on the map. For Monaco Yacht Club & Residences, the firm created a 12-story glass-encased tower that rises from a double-height lobby and culminates in a rooftop sundeck with terraces that seem to undulate like the sea. 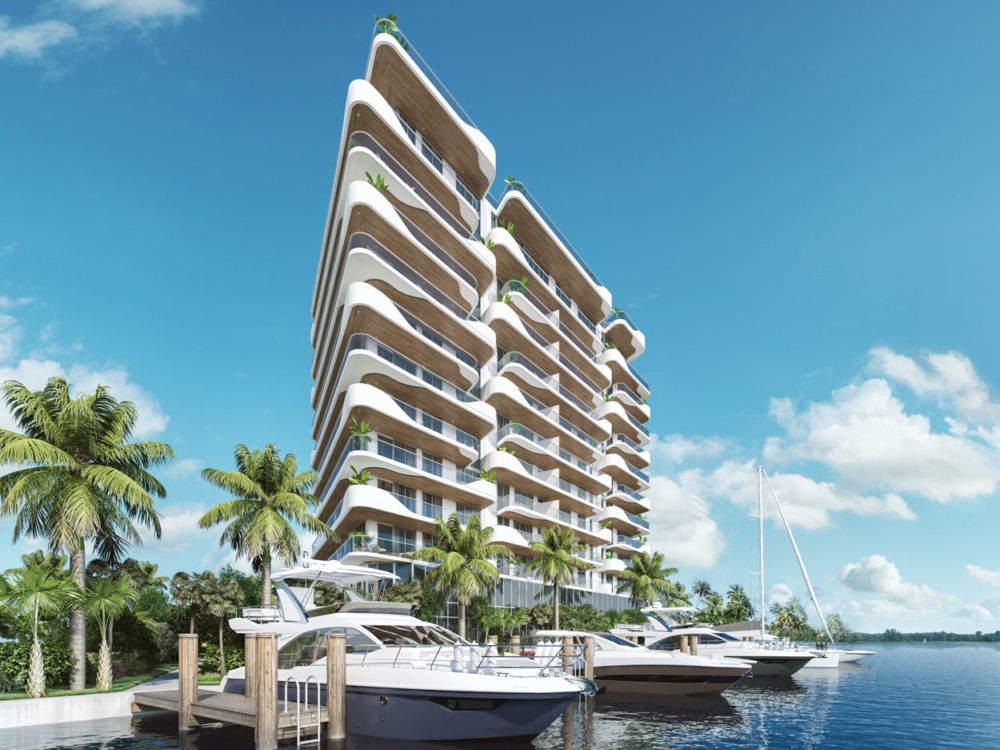 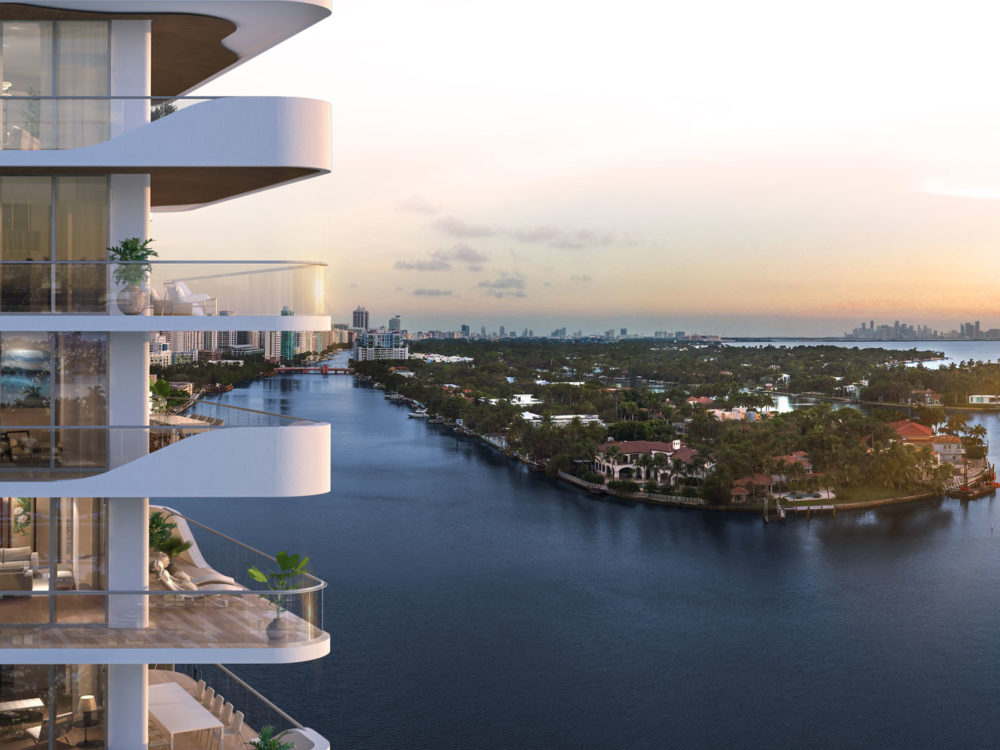 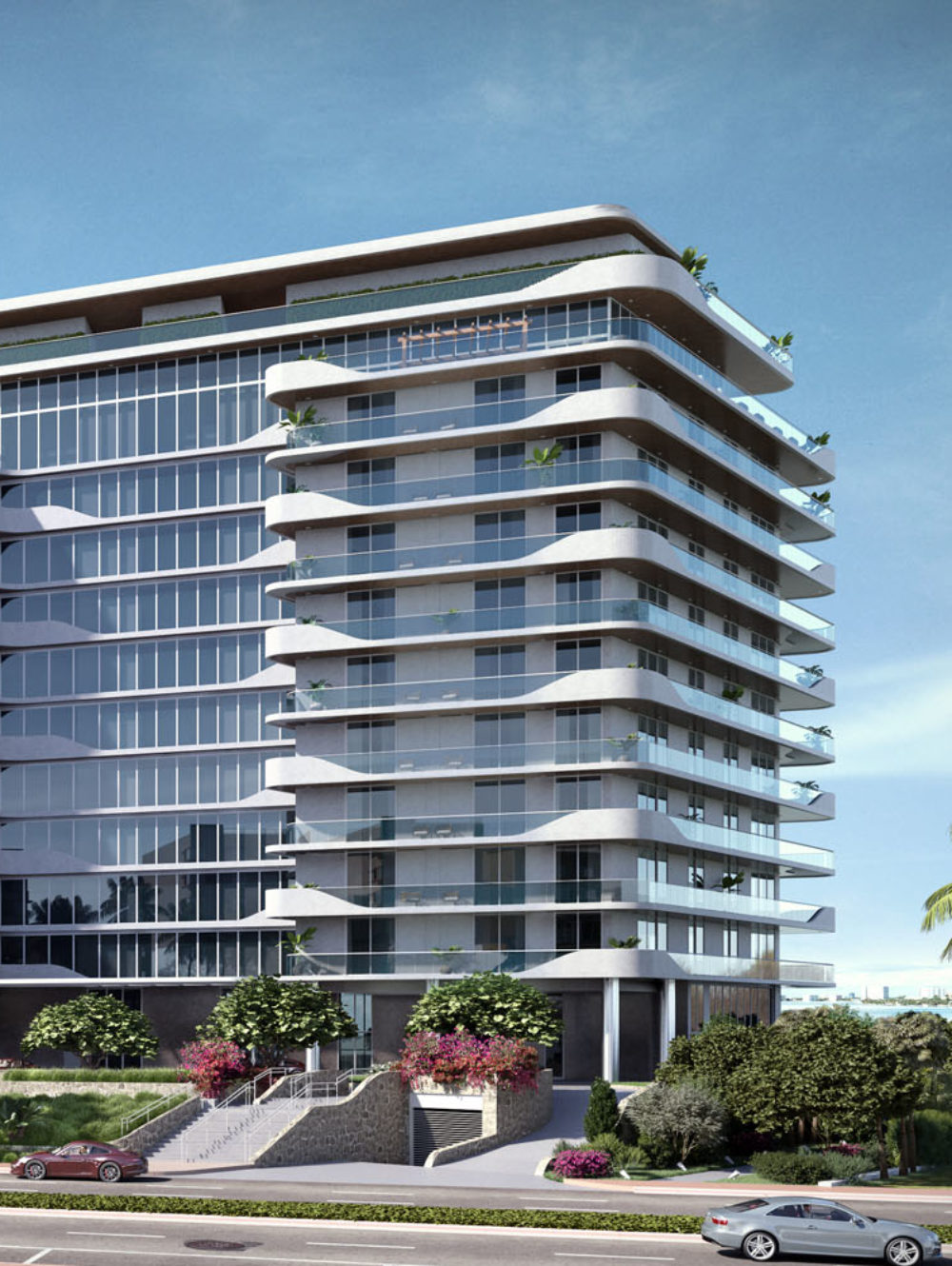 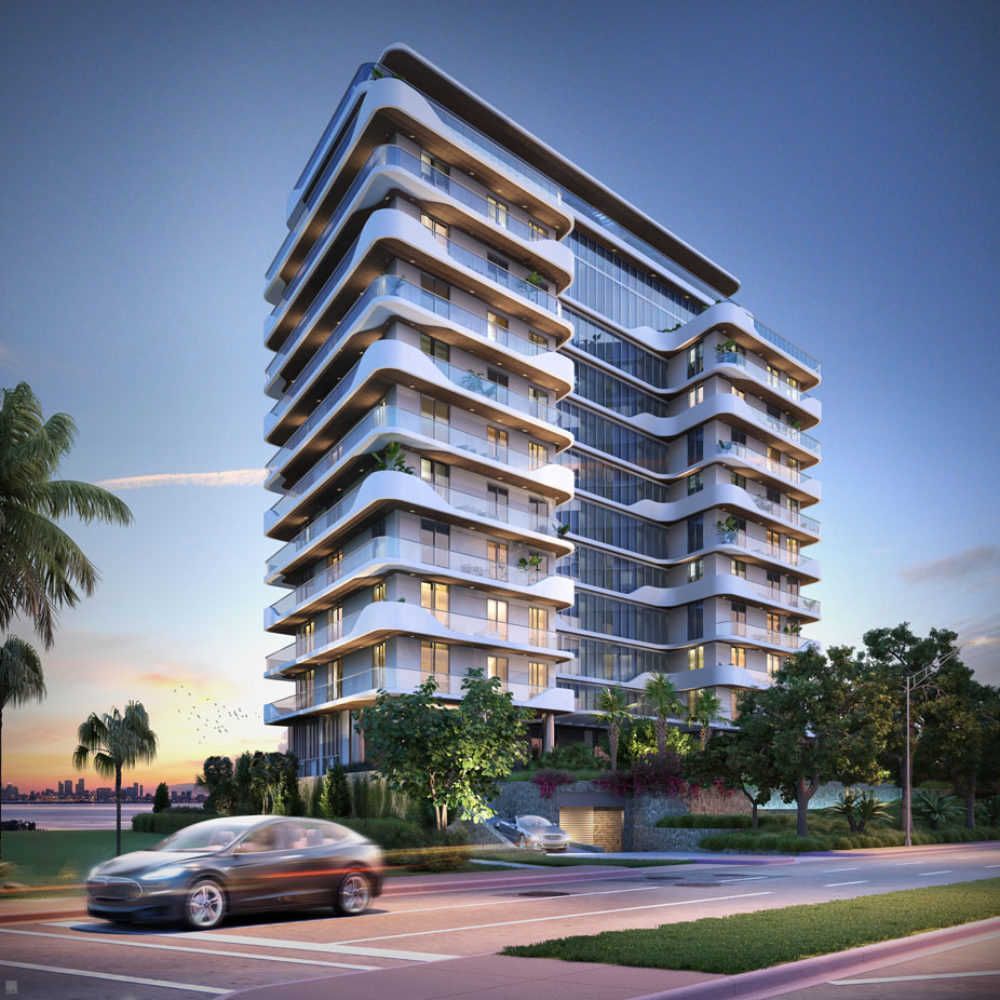 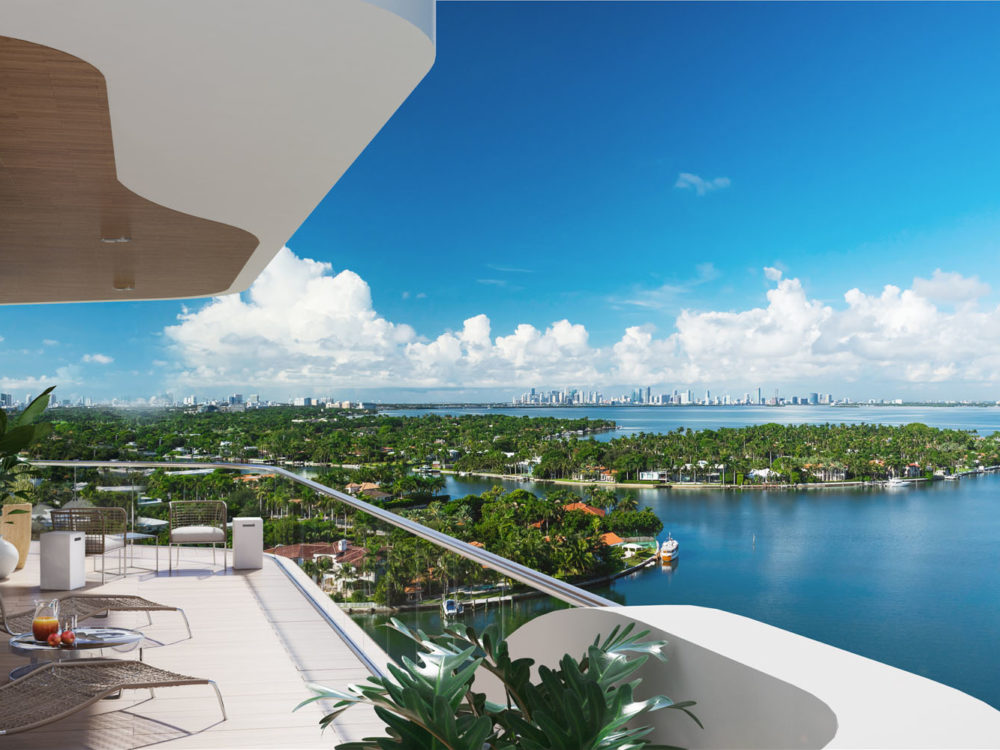 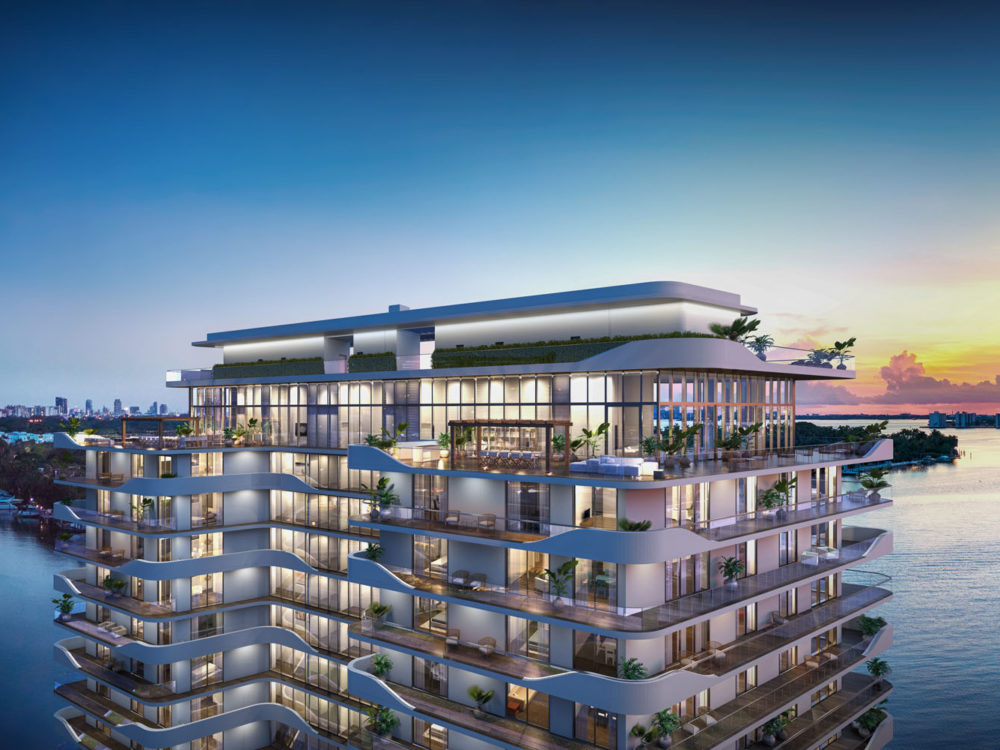 Miami Beach is sometimes considered interchangeable with South Beach, known for its art-deco architecture, nonstop nightlife, and sugar-sand beaches—but, while South Beach is part of Miami Beach, it’s not all of Miami Beach. Technically an island city connected to Downtown Miami by a series of bridges, Miami Beach stretches nearly 10 miles from South Pointe Park at the southern tip to the northernmost barrier island of Bal Harbour, the Rodeo Drive of South Florida. In between, micro-neighborhoods run the gamut from lively and eclectic to quiet and upscale.

Monaco Yacht Club is in North Beach, also known as NoBe, which stretches from 63rd Street to 87th Street. Here, the hotels are more resort-like, the pristine beaches are less crowded, and the vibe is more peaceful than party-all-night. The area is home to several parks (including the dog-friendly Bark Park and the 22-acre Enchanted Forest) and the Museum of Contemporary Art (MOCA).

Italian architect and designer Piero Lissoni is a heavyweight in the world of design, and he brings his considerable experience and minimalist style to this project. Each of the 39 residences, which range in size from one bedroom to four bedrooms, including two penthouses, has an airy, open-plan feel, with floor-to-ceiling windows and private terraces that blur the line between inside and out. Finishes and fixtures are carefully curated, with wide-plank wood floors, Corian stone counters, Boffi cabinets, and Miele fixtures in the kitchens and marble-clad bathrooms with Milltek bathtubs. The overall effect is simple but refined. 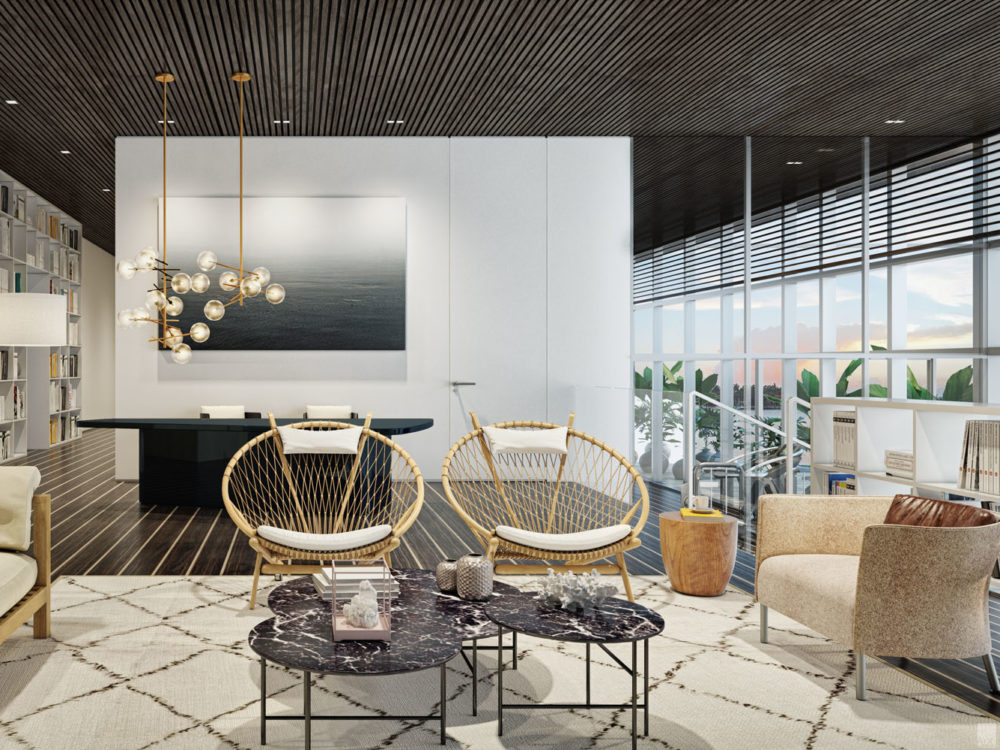 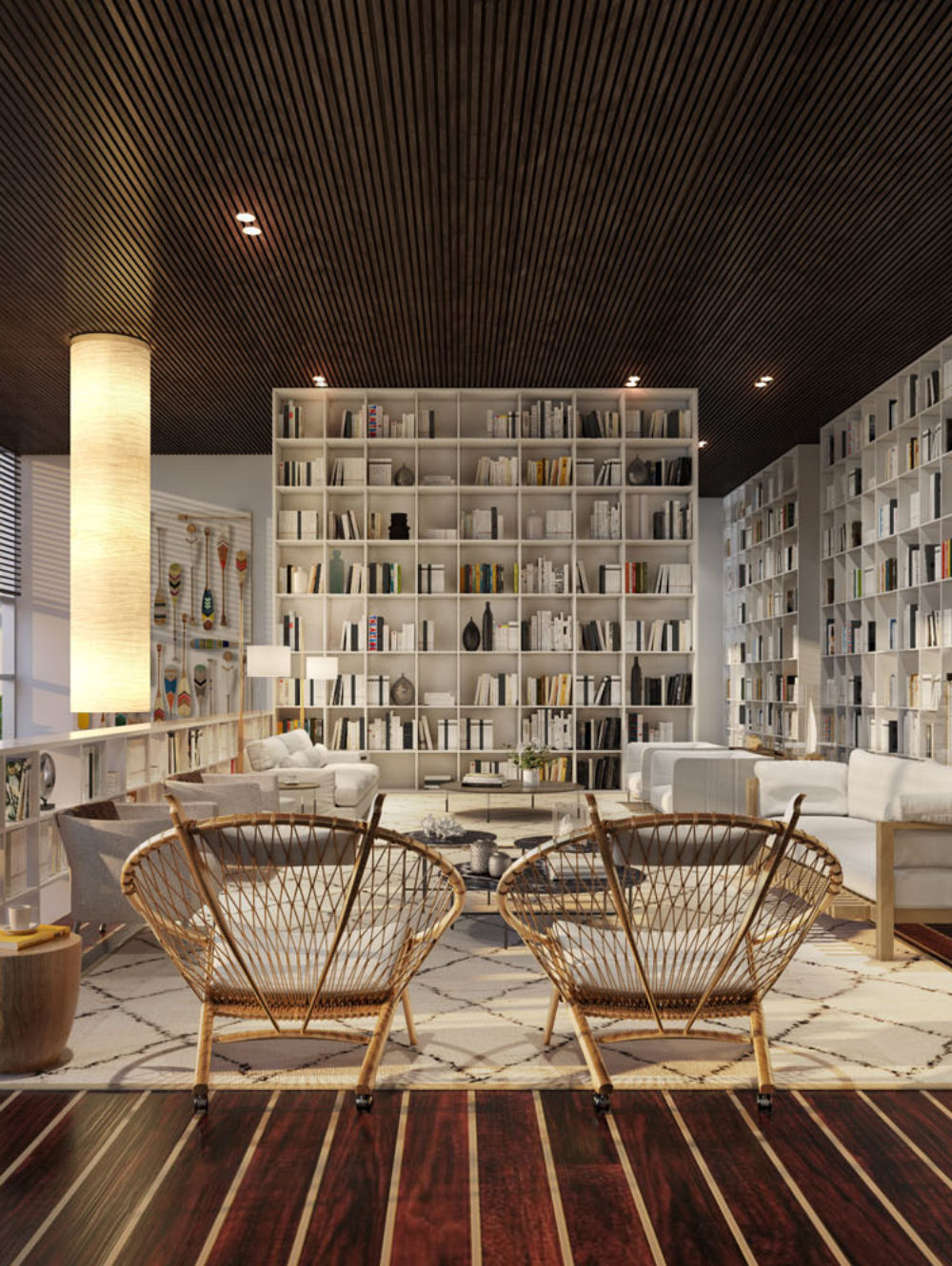 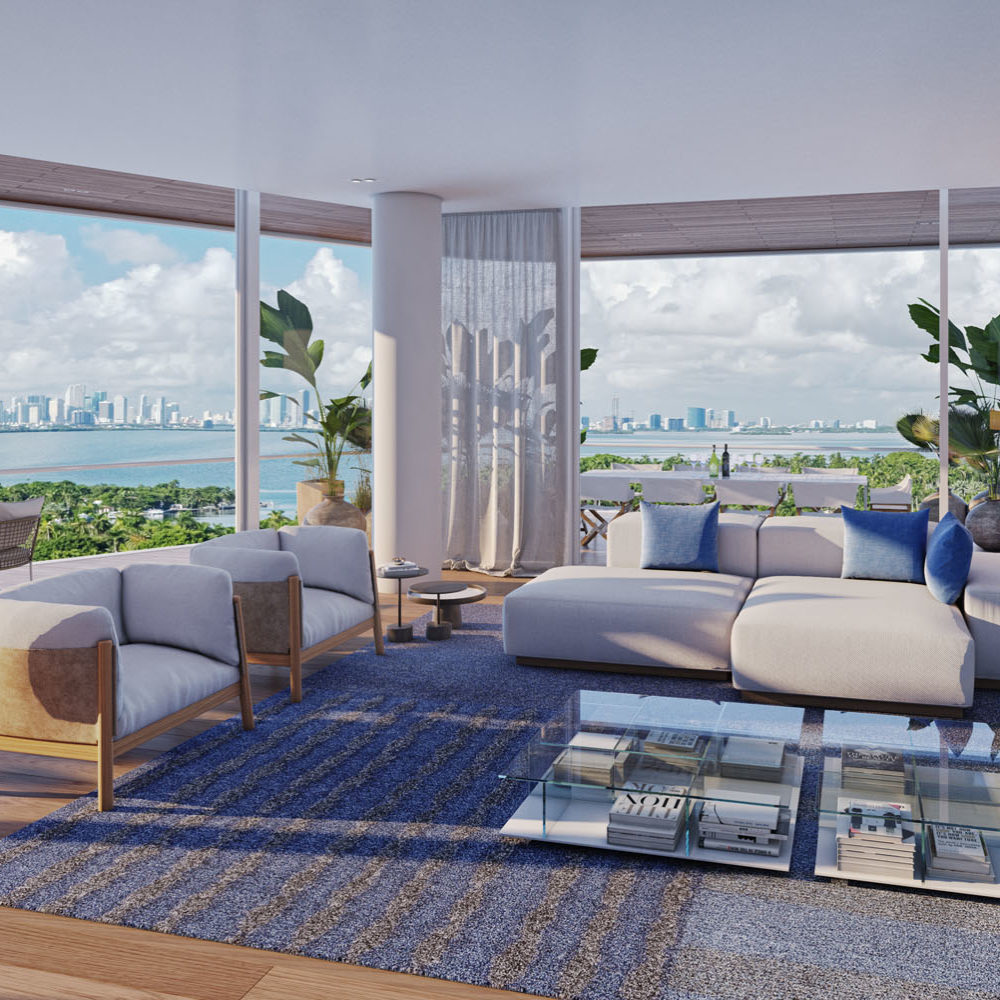 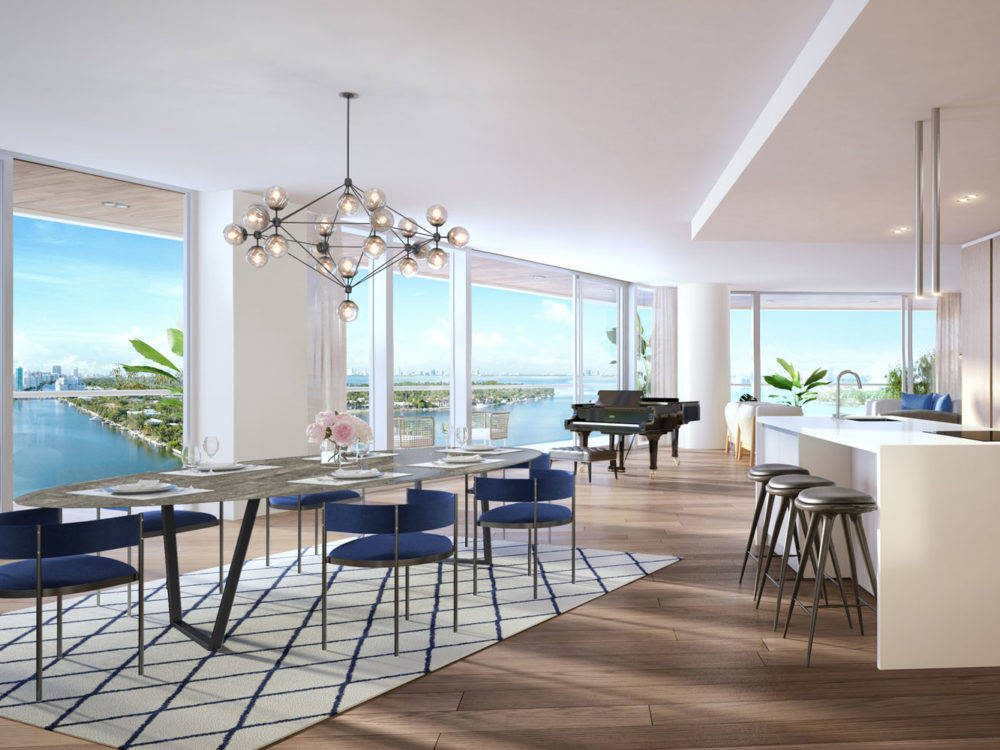 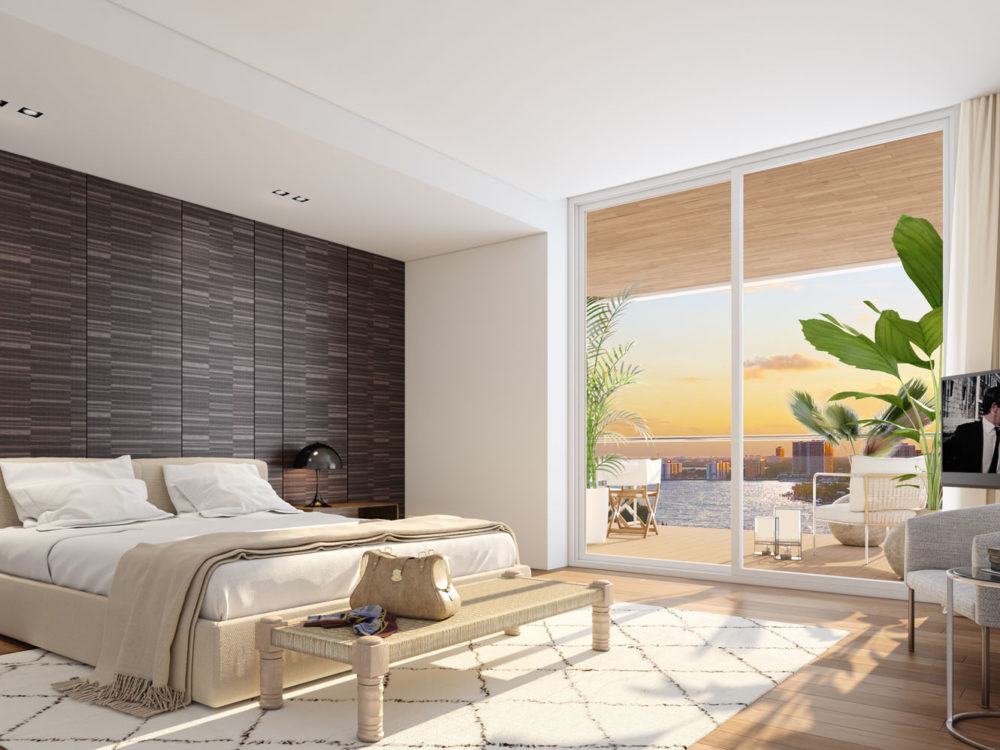 Monaco Yacht Club & Residences is located on one of the few remaining waterfront lots in Miami Beach, and it takes full advantage with a private marina with 12 slips that can accommodate yachts up to 55 feet in length and a yachting concierge that can arrange charters and expeditions as well as other water activities. The condominium development also has a rooftop terrace with a pool, Jacuzzi, and sun deck, a nautically-themed residence lounge, and a fitness center overlooking Biscayne Bay. 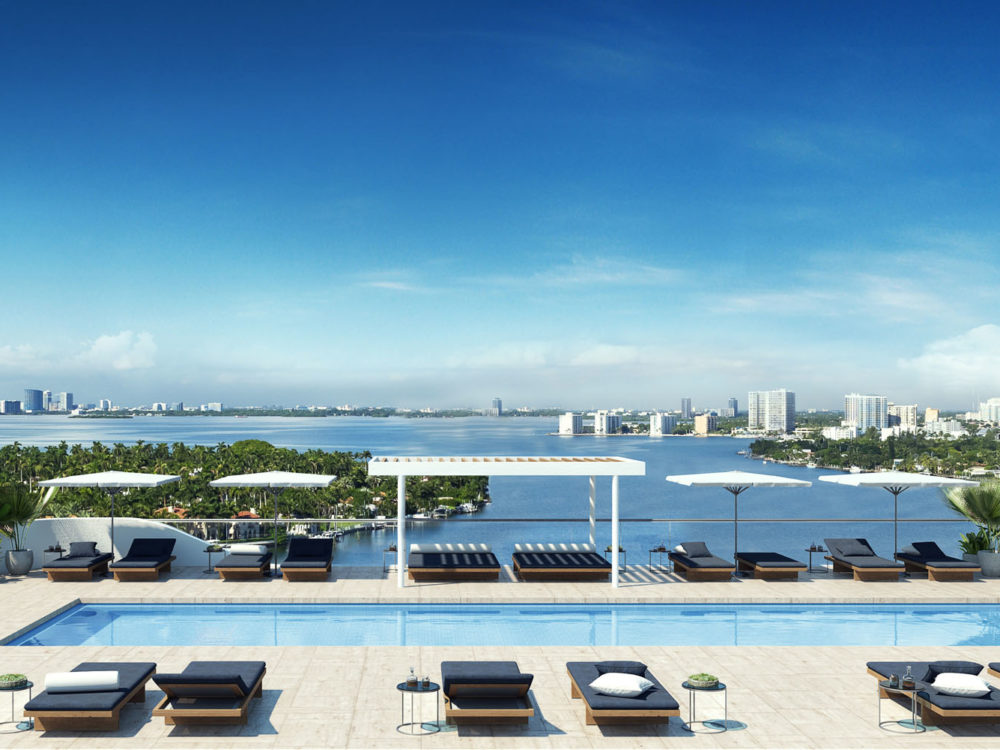 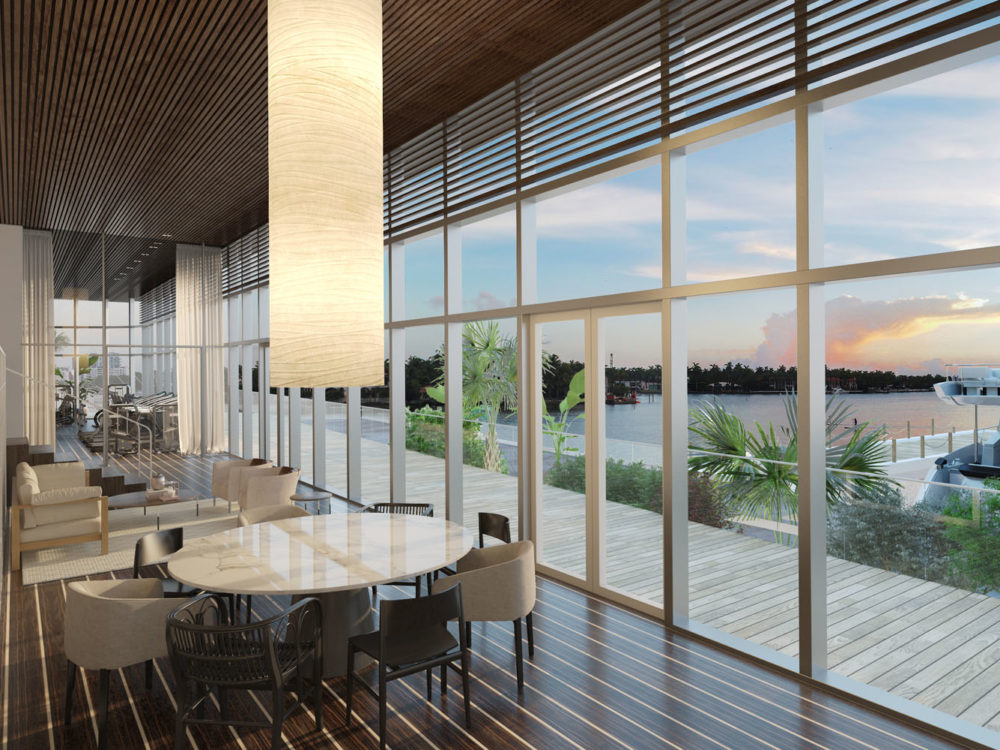 Situated in Miami’s cultural mecca, the Wynwood Arts District, NoMad Residences Wynwood is the first residential concept from the hospitality icon NoMad, best known for its former NoMad hotel in New York City. Rising just a block away from the trendy outdoor street art museum, Wynwood Walls, NoMad Residences Wynwood is a collaboration between developers Related Group and Tricap, along with NoMad’s parent company, Sydell Group. The low-rise building was designed with ultimate comfort and flexibility in mind and offers residents the option to rent their homes to guests, with an expert in-house property management team spearheading check-in and checkout.