Stunning Libraries as a Literal Amenity

TV and film streaming may have conquered the 21st-century living room, but nothing can replace getting lost in a good book. Many of the best condominium developers realize this: across the US, stunning libraries have been woven into the design. In an increasingly rushed world, these spaces provide a sophisticated sanctuary in which to slow down and escape the noise. 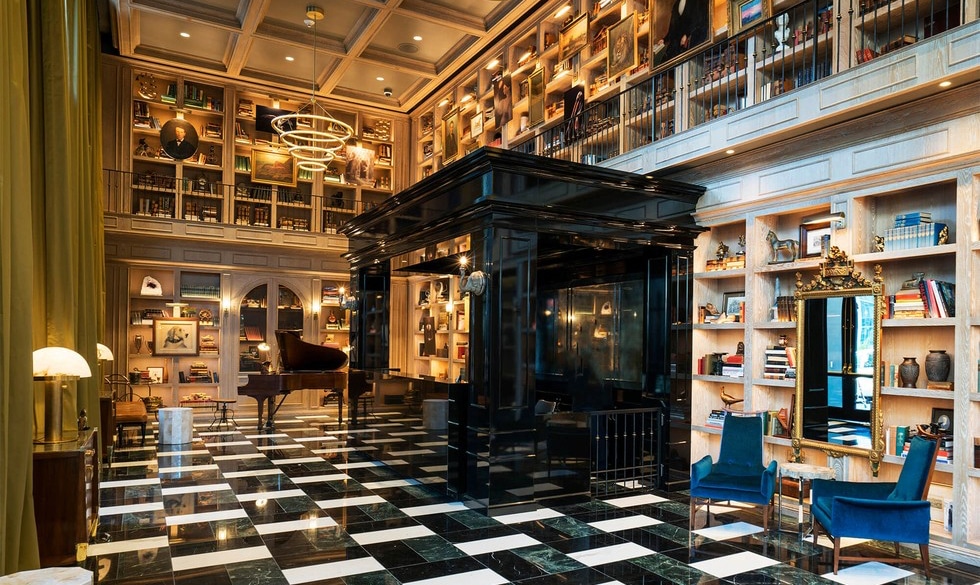 Private condo libraries often emphasize the elegance and heritage of a traditional library—adding a twist of the luxurious, the modern, or the unexpected. The Shephard in Manhattan has a wood-paneled library that opens onto a private garden. Madison Square Park Tower features a mezzanine of books connected, via spiral staircase, to a first-floor Martin Brudnizki reading lounge. At 432 Park Avenue, you can swot up on billiard shots before playing a game beneath contemporary chandeliers.

Designers and developers are going out of their way to make their library spaces breathtaking. At The Harrison in San Francisco, the Ken Fulk-designed library is an extension of the grand salon and living room. Step onto the glimmering checkerboard floor and be wowed by two stories of tomes set in cerused oak bookshelves, among heritage portraits, a grand piano, and artworks procured through SFMOMA Artists Gallery. “This is a unique space with a one-of-a-kind feel,” says Caryn Weiss, the building’s project director.

Equally stunning—albeit in a very different style—is One57’s Residents’ Lounge, overseen by Thomas Juul-Hansen. Running beneath the shelves of its sleek library is something quite extraordinary—a 24-foot-long aquarium bristling with neon fish. It’s the perfect spot to dip into Jules Verne’s Twenty Thousand Leagues Under the Sea. 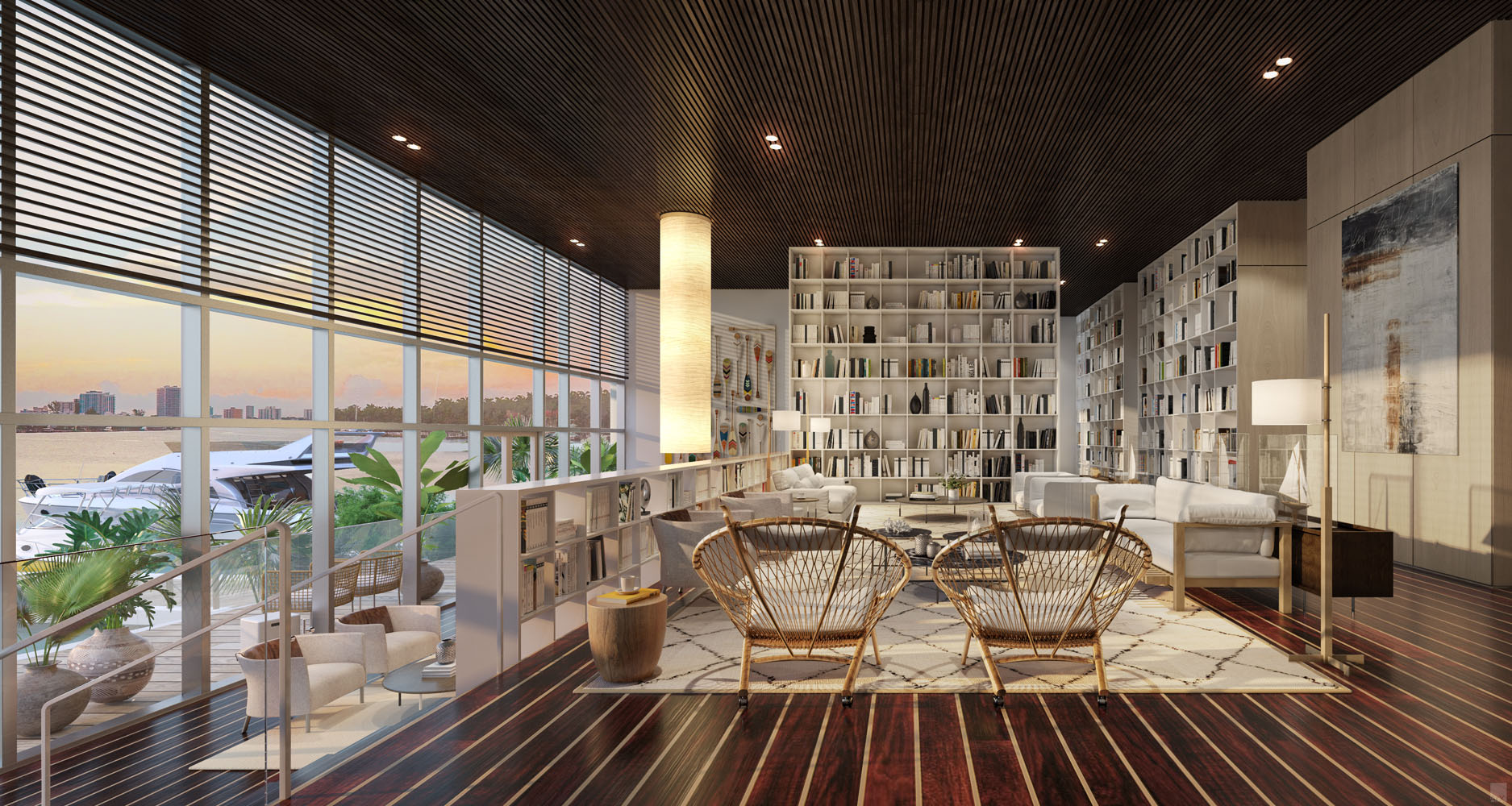 Sticking with the maritime theme, Monaco Yacht Club and Residences‘ library draws inspiration from the Côte d’Azur, with European cabinetry and furnishings. Doors open right onto the bay. It’s the exact opposite of the “stuffy” reputation libraries sometimes carry.

These library shelves may all look spectacular, but the books are there to be enjoyed—and collections are often specially curated. The Harrison’s selection is a case in point; says Caryn Weiss, “It was curated by Ken Fulk and includes everything from vintage encyclopedias and law books to coffee table books that celebrate fashion, travel, and architecture.” 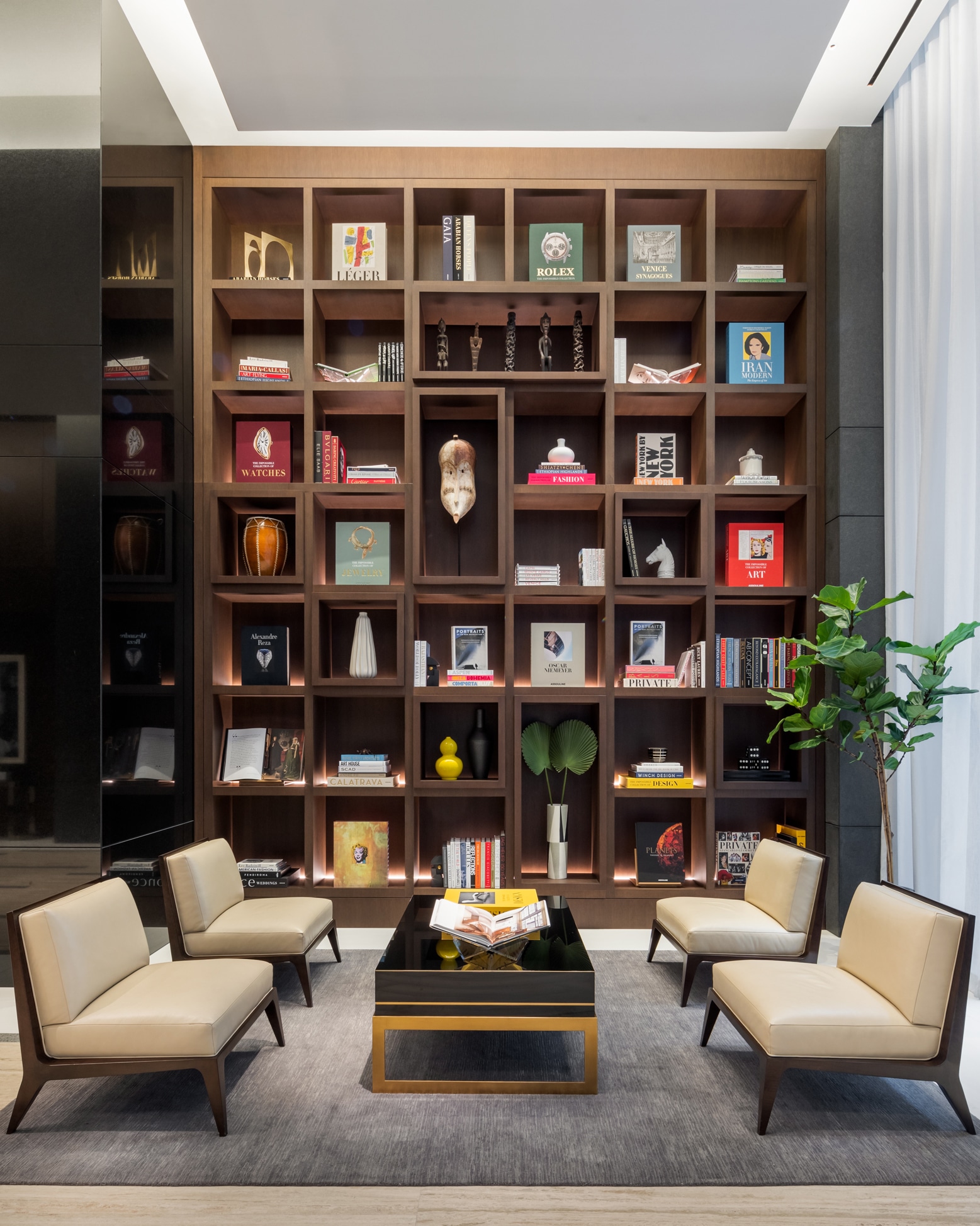 And, as you might hope, you can reel in a nautical yarn from One57’s fish-filled reading space; says Gabriele Tonini, sales associate at Extell Marketing Group: “The collection incorporates many different literary genres, including, but not limited to, maritime reads.”

Designed to Be Used

Ultimately, these libraries are spaces to be used. Says Caryn Weiss from The Harrison: “While the library is grandiose, and the beauty of it is striking, the atmosphere is warm and welcoming. The residents feel like it’s their own personal library and living room.”

The library space at One57, says Tonini, has always been immensely popular with residents: “They are now, even more so, taking advantage of the space as they spend more time at home.”

Given the year we’ve just had, libraries have perhaps become more valuable than ever—and are more than just somewhere to read. Says Scott Walsh of 277 Fifth Avenue’s library: “It’s a cozy respite when coming in from the bustling city, or a moment to gather oneself before heading out.”

These libraries can simply be a place to be alone with your thoughts, whether watching exotic fish dance in the water or enjoying the tranquility of nature outside the window. Libraries can even be—in the case of 432 Park Avenue and One57—somewhere to indulge in a little indoor sport.

“The billiards table is also widely popular among our residents,” Gabriele Tonini adds. 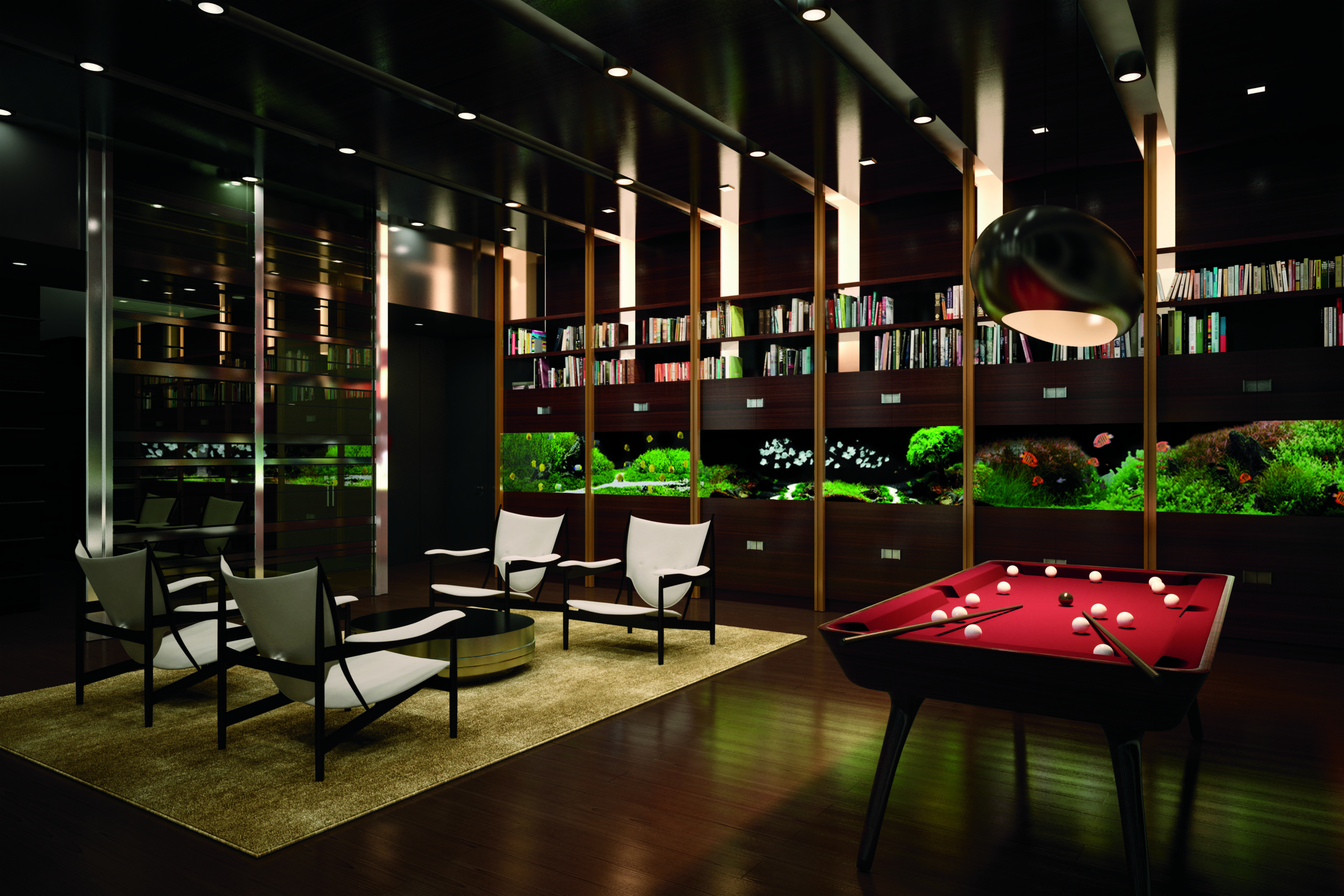 The library at One57 in New York City. (Photo Credit: Evan Joseph) 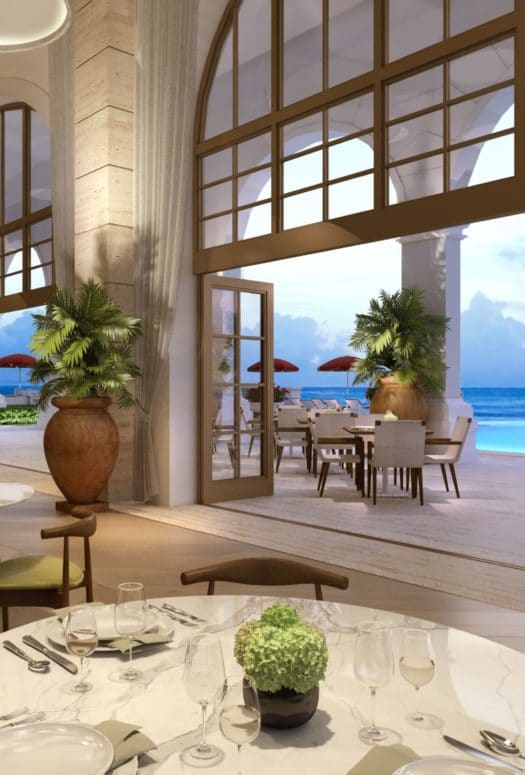 Miami's ever-evolving culinary scene is celebrated for its powerhouse chefs, who make their mark on the city with high-end restaurants. As developers along the Gold Coast seek ways to rise above the competition by offering more amenities and conveniences for residents, they are turning to esteemed chefs. 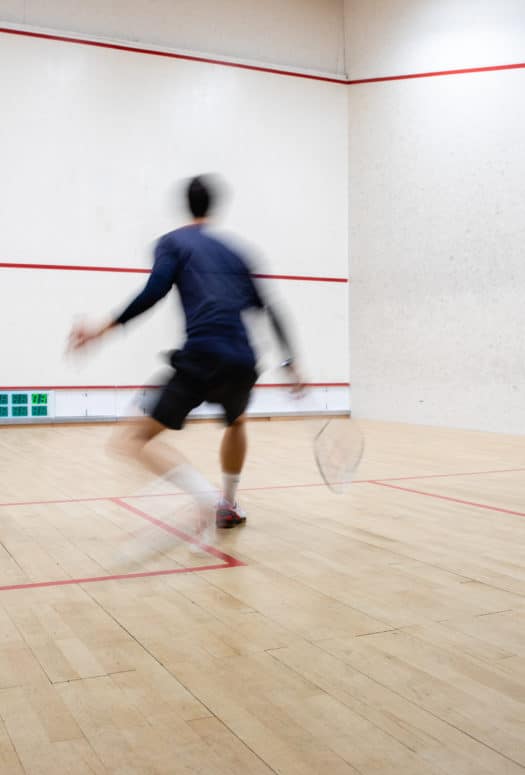 Squash Is a Hit in New Luxury Developments

As squash lobbies for inclusion in the Paris Olympics 2024 and fans eagerly await the return of the annual Tournament of Champions in Grand Central Station, the sport has gained a strong foothold in many of the most desirable residential properties. 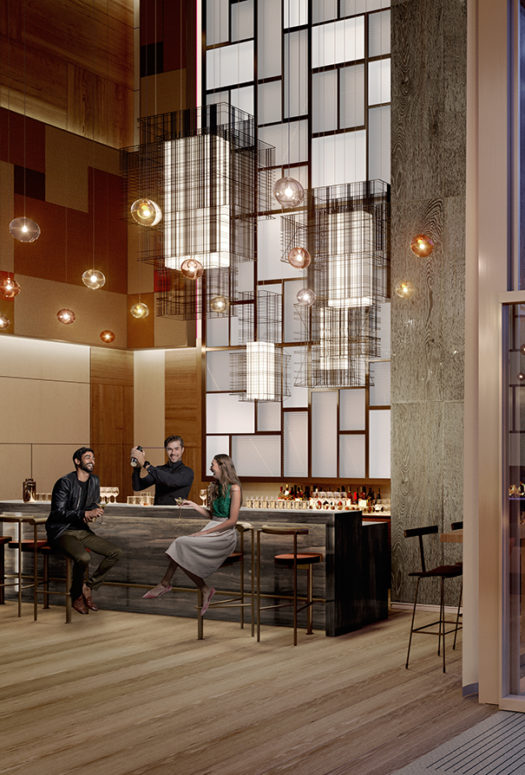 The Age of In-Condo Dining

The dining experience has changed dramatically over the past year. That sense of occasion sparked by trying a new restaurant, ordering a predinner martini, or perusing an à la carte menu has been lost. New developments with their own dining and drinking amenities are an attractive alternative. 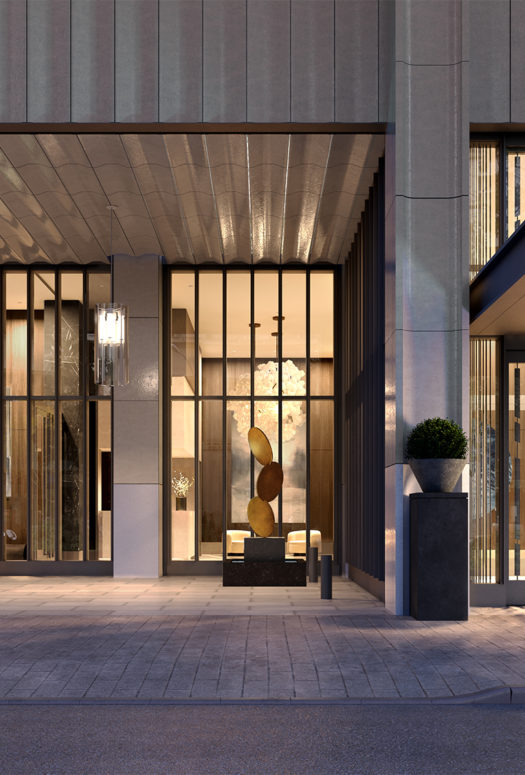 From the revival of drive-up porte-cochere entrances to cutting-edge sky garages, here are the car-driven design approaches that will set auto aficionados’ hearts racing.